Pokémon moves into its fourth generation with Pokémon Diamond & Pokémon Pearl and brings with it some major changes to the gameplay, in particular the battle system. 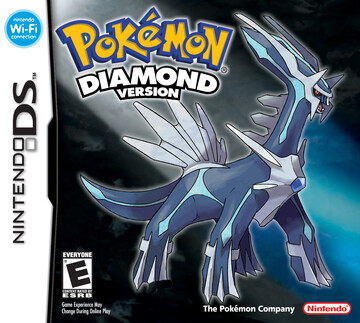 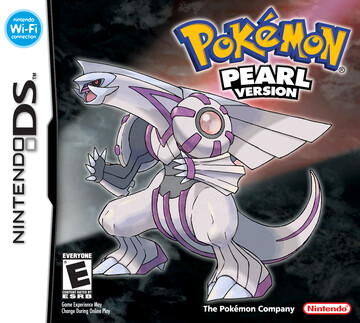 It is not possible to trade Pokémon with earlier games, however, Diamond/Pearl allows the migration of Pokémon from any Generation 3 game, by inserting the cartridge into the GBA slot on the DS and selecting the appropriate option on the startup screen (after the National Dex has been obtained).

Furthermore, a special area called Pal Park is opened up, where you can catch the Pokémon you migrate in a sort of mini-game. Pal Park has five areas; each species of Pokémon will always reside in a particular area.

The day & night system makes a major return, with more time- and day-based events such as new Pokémon evolutions.

The Sinnoh Underground, where you can dig up treasures, Pokémon fossils and other items. It also takes advantage of the DS' infrared connectivity.

A gadget called the Pokémon Watch, or Pokétch is the Diamond/Pearl equivalent of the PokéGear or PokéNav from other games. It utilizes the touch screen and has many apps (25 in total) including a clock, Dowsing Machine (item finder), calculator, step counter.

The wi-fi connectivity feature of the Nintendo DS is taken advantage of, with the Global Trade Station allowing for Pokémon trades over the Internet.

A new type of contests, called Super Contests, are introduced. There are three sections: dressing up a Pokémon with accessories; mimicing and creating dance routines; and performing their battle moves in front of judges.

The story takes place in the mountainous region of Sinnoh. In your home town of Twinleaf, your friend encourages you to go looking for Pokémon. When running into trouble, the two of you take a Pokémon from an abandoned briefcase. It turns out to belong to Professor Rowan of Sandgem Town. After returning the case you get to keep the Pokémon and begin your adventure exploring Sinnoh!

Along the way you run into many trainers and wild Pokémon as usual. An evil group called Team Galactic get in your way, and try to take over the world by harnessing the power of legendary Pokémon.

Diamond/Pearl overhauls the battle mechanics and ushers in a new style of competitive gameplay. In previous games, moves of certain types were always physical or special. Now, each attack is individually categorized as Physical (using the Attack stat) or Special (using the Special Attack stat). A third category, Status, covers non-attacking moves such as those raising or lowering stats.

This means that every Pokémon can get Same Type Attack Bonus (STAB), whatever their type. For example, Gyarados has always had a much higher Attack than Special Attack, but since Water-type moves were previously all Special category, Gyarados could not use its STAB well. Now, it can use a Physical Water move like Waterfall to great effect!

In many cases however, several types still lean towards Physical or Special. Fighting moves, for example, are mostly physical, while Psychic moves are still mostly special.

Unlike the preceding Ruby/Sapphire, the local Pokédex in Diamond/Pearl features a mix of new Pokémon and older Pokémon like Abra, Zubat and Geodude. There are also many new evolutions for previous Pokémon such as Rhyperior, Electivire, Magmortar and Mamoswine to name a few.

Once you have beaten the Elite Four and seen every Pokémon in the Sinnoh Pokédex, you receive the national dex, which lists all 493 Pokémon in their original order.

Diamond/Pearl also introduces the most legendary Pokémon of any generation, with 14 mythical creatures.

After obtaining the national dex, Pokémon from other regions are imported into Sinnoh. You also receive a key item called the PokéRadar, which allows you to search out rare Pokémon in grass. Using the PokéRadar makes several grass patches shake around you, each indicating a Pokémon is hiding there. Some of them will be a Pokémon from a different region.

Some Pokémon can also be caught in the wild when a Generation 3 game is inserted into the GBA slot on the Nintendo DS.