The fourth generation continues with the usual third game that repeats most of the gameplay from Pokémon Diamond/Pearl but with an updated local Pokédex, Distortion World and other new features. 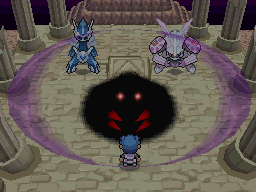 Several Pokémon are not available during the course of the game, though they are available from either or both of Platinum's predecessors, Diamond & Pearl, as noted below.

The majority of Platinum follows the same story as Diamond and Pearl, however, there are some key changes. The beginning is slightly different - you meet Professor Rowan and his assistant before you get to the lake and he lets you choose one of the three starters. You then first battle your rival, rather than a wild Pokémon.

The order in which you tackle Sinnoh's gyms changes. In Diamond/Pearl your third gym battle was Maylene in Veilstone City, followed by Crasher Wake in Pastoria City, then Fantina in Hearthome City. In Platinum the third gym you come to is Fantina's then Maylene and Wake.

The local Sinnoh Pokédex is expanded upon, with 59 more Pokémon (old and new) including Rotom, Giratina, the whole Eevee line and new evolutions for older Pokémon like Dusknoir and Tangrowth.

To obtain the National Pokédex, you must have seen all 210 Pokémon in the Sinnoh dex. All Pokémon can be seen throughout the game in the wild and via trainer battles, except for event Pokémon Manaphy, who is added to the dex by reading the book in the Pokémon Mansion.

The biggest change in gameplay is the addition of a parallel universe called Distortion World. Cyrus, the leader of Team Galactic, summons Dialga and Palkia at the Spear Pillar. This causes an apparent rip in the space-time continuum and Giratina briefly emerges from the wormhole.

Giratina and Cyrus go back into the Distortion World, and you must follow. It's a very trippy area, quite like an Escher painting. You can walk on the walls and the camera rotates as you jump around. Eventually you can catch Giratina here.

After completing the basic storyline, a new area called the Battle Frontier is opened, taking the place of the Battle Park in Diamond/Pearl. While the park in D/P only had basic battling, the Frontier has five different zones with varied rules. Clockwise from top, they are:

Battle Tower
Never Lose! Keep Winning!
Here you select a team of 3 Pokémon and battle 7 trainers consecutively in each round.
Battle Factory
Win Consecutively with Rental Pokémon
In the factory you cannot use your own Pokémon; instead you must choose from a selection of random Pokémon. You battle 7 trainers consecutively in each round and between battles can trade one of your Pokémon for a Pokémon you just fought.
Battle Arcade
Where Events Sway Outcomes
Before each battle you must choose an event from the game board. Events include reducing the a Pokémon team's levels or HP, or inflicting a status condition. They may be applied to your or your opponent's Pokémon, so can be detrimental as well as beneficial.
Battle Castle
Manage Battles with Castle Points
At the castle you earn points by battling. You choose 3 of your own Pokémon and battle 7 trainers per round. With the points you earn you can heal/revive your Pokémon, raise the level of your opponent's Pokémon (doing this gains you more points), rent items and more.
Battle Hall
Let Each Pokémon Seek No. 1
Here you choose a single Pokémon and conduct 10 consecutive battles. For each battle you choose the type of the Pokémon you wish to battle. For example if you use an Electric Pokémon you may wish to battle Water or Flying Pokémon.

The Battle Frontier was also carried forward to HeartGold/SoulSilver, meaning it appears in two separate regions.

A new batch of Move Tutors, who will teach moves to your Pokémon in return for colored shards. See here for details.

A Wi-Fi Plaza, which has various mini-games to be played over Nintendo WFC.