The fourth generation continues with Pokémon HeartGold and Pokémon SoulSilver, the much-anticipated remakes of second-generation Gold and Silver, with some aspects from Crystal. 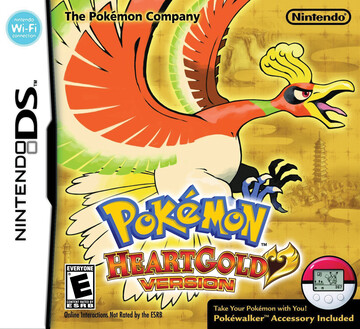 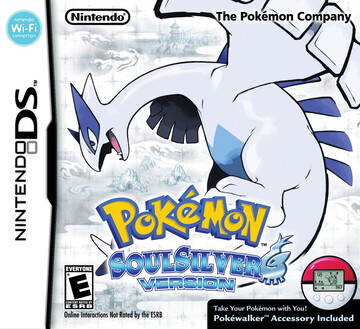 The most significant addition was the Pokéwalker - a new peripheral to which you can send Pokémon and take them for a walk. It counts your steps and you can unlock multiple routes with Pokémon to catch and items to find. See our Pokéwalker page for full details.

A feature called the Pokéathlon is included, which is a series of mini-games that test your Pokémon's ability in five newly-introduced stats: Power, Skill, Stamina, Speed and Jump. These are separate from Pokémon's regular stats but are usually based on them or the Pokémon's attributes. Flying Pokémon generally have better Jump, while Pokémon with higher Attack/SpAtk often have more Power.

Defog is replaced by Whirlpool as HM05.

The gameplay follows the same story as Gold/Silver/Crystal. You start in Johto and must travel the area beating the eight gym leaders and then the Elite Four (plus the Champion). After 'completing' the game you are able to visit the original Kanto region and battle its eight gym leaders as well as Red, a tough trainer found on top of Mt. Silver.

The graphics and music were improved, with terrain looking more 3D-like than in previous games. A key item obtainable later in the game called GB Sounds allows you to switch back to the original 8-bit music. The menu system was vastly improved, making better use of the touch screen for the majority of functions.

HG/SS makes much better use of the touchscreen than the previous games, with the game's menu now residing on the touchscreen. All the menu items like the Pokédex and bag can be navigated by the screen alone (although you can still use the DS buttons if you like).

HeartGold & SoulSilver also sees the return of a feature from Pokémon Yellow where your lead party Pokémon follows you around outside its PokéBall. However, the larger Pokémon like Ho-Oh or Wailord are put into their PokéBalls when you go inside building.

You can also capture many legendary Pokémon in HG/SS, not just the ones from the Johto Pokédex.

The two main legendary Pokémon are Lugia and Ho-Oh, the mascots of SoulSilver and HeartGold repsectively. Lugia is located at Whirl Islands, while Ho-Oh is located at the Bell Tower. You encounter your game's mascot during the storyline at level 45, and must capture or defeat it (if the Pokémon faints, it will reappear again after you beat the Elite Four).

You can also catch Lugia in HeartGold and Ho-Oh in SoulSilver later in the game. A person in Pewter City will give you a Silver Feather or Rainbow Wing which allows access to Whirl Islands or the Bell Tower repsectively. The Pokémon will be level 70.

Known as the legendary beasts, you encounter these Pokémon during the course of the storyline and Raikou & Entei start roaming around Johto.

Suicune is slightly different in that it doesn't exactly roam, but when you walk nearby, it flees to another location. After a few times you will be able to battle it. See the PokéBase question, Where is Suicune? for the locations.

Known as the legendary birds, they are more-or-less in the same locations as FireRed/LeafGreen and are at level 50. Articuno is in Seamfoam Islands; Zapdos is outside the Power Plant; but Moltres is in Mt. Silver rather than Victory Road.

Just like in the original games and FireRed/LeafGreen, Mewtwo is inside Cerulean Cave, and one of the strongest at level 70.

After you have defeated Red on top of Mt. Silver, you can obtain an orb from Mr. Pokémon - the Blue Orb in HG or the Red Orb in SS. These allow you to capture Kyogre or Groudon repsectively, when you take them to the Embedded Tower on Route 47.

If you trade the opposing Pokémon into your game and talk to Professor Oak, he will give you a Jade Orb. Both Pokémon must have originated in HG/SS, not migrated from Ruby/Sapphire/Emerald or anywhere else. Return to the Embedded Tower and Rayquaza will be there!

After obtaining the National Pokédex, Steven Stone will meet you outside the Vermillion City Pokémon fan club, and either Latias (HeartGold) or Latios (SoulSilver) will begin roaming around Kanto. You can check where they are in the PokéGear.

You could also encounter the opposite Pokémon in each game by getting the Enigma Stone from a wi-fi event, then showing it to Steven at Pewter City museum. The event is no longer running.

The Sinnoh legends are also available if you received the special Arceus given away at the recent Pokémon movie. Take it to the Ruins of Alph and you will be able to access the Sinjoh Ruins and capture one of Dialga, Palkia or Giratina, at level 1.