Pokémon Shuffle is a match-three game featuring Pokémon. It is free to download and play, but imposes restrictions on play time via Hearts. The game includes in-app purchases whereby real money can be spent on Hearts and power-ups. 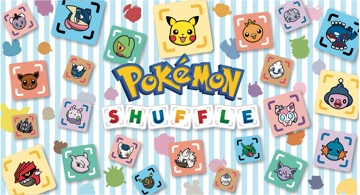 Pokémon Shuffle consists of a 6x6 board of Pokémon icons and the aim is to match three or more of the same Pokémon by swapping two icons. Each level in the game is a battle against a wild Pokémon; the more matches made, the more damage is done. As matches are made, those icons are removed and more drop in from above.

Each of the main stages has a set number of moves in which it must be completed. If the Pokémon is defeated within the limit, there is a chance to catch it and add it to your roster. Expert stages (unlocked after doing well on the main stages) instead have a time limit and matches must be made as fast as possible before time runs out.

Each Pokémon has a base Attack power. Completing stages earns Pokémon experience points (EXP) and increases their level, increasing their Attack. The maximum is level 10. The charts below list the attack at each level and EXP required.

Like the main Pokémon games each Pokémon has a type. However all Pokémon in Shuffle are single type, so Bulbasaur for example is Grass type rather than Grass/Poison. Most Pokémon follow their first type from the main games, the most notable exception being Normal/Flying Pokémon who are all Flying type in Pokémon Shuffle.

Pokémon also have abilities that can help in gameplay. Abilities can do more damage in certain situations, temporarily immobilise the opponent, or clear away disruptions or other Pokémon.

Mega Pokémon play a big role in Pokémon Shuffle. At the end of each set of levels a Mega Pokémon is encountered, who is usually quite strong. When defeated, a Mega Stone for that Pokémon is received. Pokémon placed in the first slot of the roster with their corresponding Mega Stone can Mega-Evolve during a level. Matching Mega-Evolved Pokémon scores many more points and can remove a large swathe of Pokémon.

This table shows what each Pokémon's Attack Power is at each level. For example, Gengar (base power 70) would have an attack of 82 at Level 6.

Most Pokémon can be raised to Level 10, which the game shows as MAX. Some Pokémon can be given the Raise Max Level item, which as the name suggests increases their maximum level and therefore their maximum power. For example, Blastoise can take 5 RMLs and increase its power to 105, higher than a level 10 legendary like Palkia.

The maximum level available in Pokémon Shuffle is Level 30.

This tables shows how much EXP a Pokémon needs to reach the next level. More powerful Pokémon are harder to train and require more EXP per level.

If a stage is completed, each Pokémon in the roster earns EXP equal to the number of turns the stage has. In addition, the Pokémon that makes the most matches during the stage earns double EXP - this is shown by a crown icon afterwards. So for example, if Ampharos (50 turns) is beaten, one Pokémon would earn 100 EXP while the other three earn 50.