Meltan is a Steel type Pokémon introduced in Generation 7. It is known as the Hex Nut Pokémon.

Most of Meltan's body is made from liquid metal, and its shape is very fluid. It can use its liquid arms and legs to corrode metal and absorb it into its own body. Meltan generates electricity using the metal it absorbs from outside sources. It uses this electricity as an energy source and also as an attack that can be fired from its eye.

Meltan evolves into Melmetal in Pokémon GO, with 400 Meltan Candies.

Note: Meltan has an ability assigned in the code for Pokémon Let's Go, even though abilities are not available. 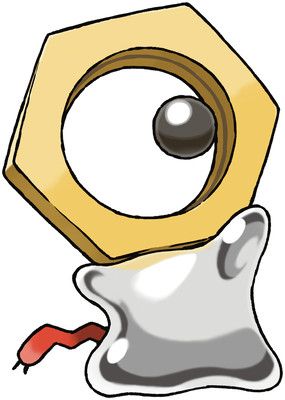 The effectiveness of each type on Meltan.

Moves learnt by level up

Meltan learns the following moves in Pokémon Sword & Shield at the levels specified.

Meltan does not learn any moves by breeding in Pokémon Sword & Shield.

Meltan is compatible with these Technical Machines in Pokémon Sword & Shield:

Meltan is compatible with these Technical Records in Pokémon Sword & Shield:

Moves learnt by level up

Where to find Meltan